BRYAN Chapman reckons there is overwhelming evidence, already in the public domain, for the exploration licence granted to Doyles Creek Mining to be immediately suspended.

Doyles Creek Mining’s exploration licence was granted in December 2008 and next month the Independent Commission Against Corruption (ICAC)  is expected to investigate the granting of the licence.

Mr Chapman and his family live on “Appletree” at Apple Tree Flat - a 142 hectare property that was bought by his grandparents in 1903.

Once a dairy farm, today the Chapman family graze beef cattle and use the fertile alluvial flats to fatten steers.

In December last year the Chapmans received a letter demanding access onto their property from Nucoal – owners of Doyles Creek Mining.

Strongly opposed to giving access to the company and vehemently opposed to the mine Mr Chapman, his father Douglas and his brother Craig are considering their options as far as the access demand is concerned.

It was their belief that the Australian Stock Exchange (ASX) statement made by Nucoal on December 5, 2011 meant the  company would not proceed with demanding access onto properties until the ICAC investigation was completed,

“The licence was a  deal done to hugely profit a few people not all the people of this state – it was granted against departmental advice, it didn’t go to tender and the claim it was to be a training mine is simply ludicrous,“ he said.

“If the government suspends the licence now no one will need to be compensated, the state will have lost nothing as no royalties have been paid.

“And if the ICAC investigation proves the granting of the licence was squeaky clean we can start all over again without the current cloud of corruption hanging over the project.”

According to Mr Chapman Nucoal has not, to date, applied for a licence for a registered training school.

“Their claims on this matter are misleading to say the least – like so much of this project it is simply not what it appears,” he said.

In the meantime the Chapman family await Nucoal’s moves regarding their access demands.

“Given that company access will see eight drilling rigs on our farm,  we are very worried about what will happen to our beautiful productive farm,” Mr Chapman said.

“Putting to one side all the other issues regarding the granting of the exploration licence we have a well on this property dug by my uncles in 1925 and to date it has never run dry.

“Can we be given absolute guarantees the drilling rigs will not affect the water aquifers on the property and therefore our well?

NUCOAL  Resources, the owner of Doyles Creek Mining, stated in response to the NSW Premier’s letter sent to ICAC Commissioner David Ipp, last week that is was business as usual for the company adding it would continue to conduct exploration activities in accordance with its exploration licence.

Asked whether the company would cease its activities until the ICAC investigation into the granting of Doyles Creek Mining licence was completed the answer was no.

Nucoal’s  media spokesman Patrick Southam, principal GSG Counsel  said the company was moving into the next stage of its drilling program and that was why the company had sent out Section 142 notices to the Chapmans seeking formal access to their property, as the company was legally required to do.

“The Nucoal ASX statement of December 5,  2011 referred to current exploration activities based on the program at that time,”  he said.

Mr Southam said based on the results from that earlier program, the next stage of drilling is planned – that was how exploration works.

December 15, 2008: NSW Minister for Resources  Ian Macdonald issues an exploration licence to Doyles Creek Mining for the Doyles Creek mine near Jerrys Plains. The licence was awarded without tender and contrary to departmental advice.  The unlisted Doyles Creek Mining was then chaired by the  former  Construction, Forestry, Energy and Mining boss,  John Maitland who was a minority investor in the project described as being a training mine.

February 2010: Doyles Creek Mining sold to Nucoal Resources a company that was floated on the Australian Stock Exchange on this date.

November 2011: NSW Parliament passed a resolution under section 73 of the Independent Commission Against Corruption Act 1988 referring to the Commission for investigation and report certain matters relating to Exploration Licence No. 7270 under the Mining Act 1992 over the Doyles Creek area.

December 2011: NSW Minister for Energy and Resources Chris Hartcher asked Nucoal to halt its activities at Doyle’s Creek and he also asked the Independent Commission Against Corruption to examine the granting of the exploration licence to Doyles Creek Mining in 2008.

Nucoal responds to Hartcher’s request by issuing an announcement to the Australian Stock Exchange stating it would not explore on land owned by Ian and Robyn Moore for the duration of the exploration licence.  It also stated it would continue current exploration activities on land where Nucoal had access agreements in place with landowners and on land which Nucoal owns.

1. Any recommended action by the NSW government with respect to licences or leases under the Mining Act over Doyles Creek area.

2. Any recommended action by the NSW Government with respect to amendment of the Mining Act.

3. Whether the NSW government should commence legal proceedings or take other action against any individual or company in relation to the circumstances surrounding the allocation of Exploration Licence No 7270.

March 2013: ICAC is expected to hold hearings into the awarding of Exploration Licence 7270 to Doyles Creek Mining. 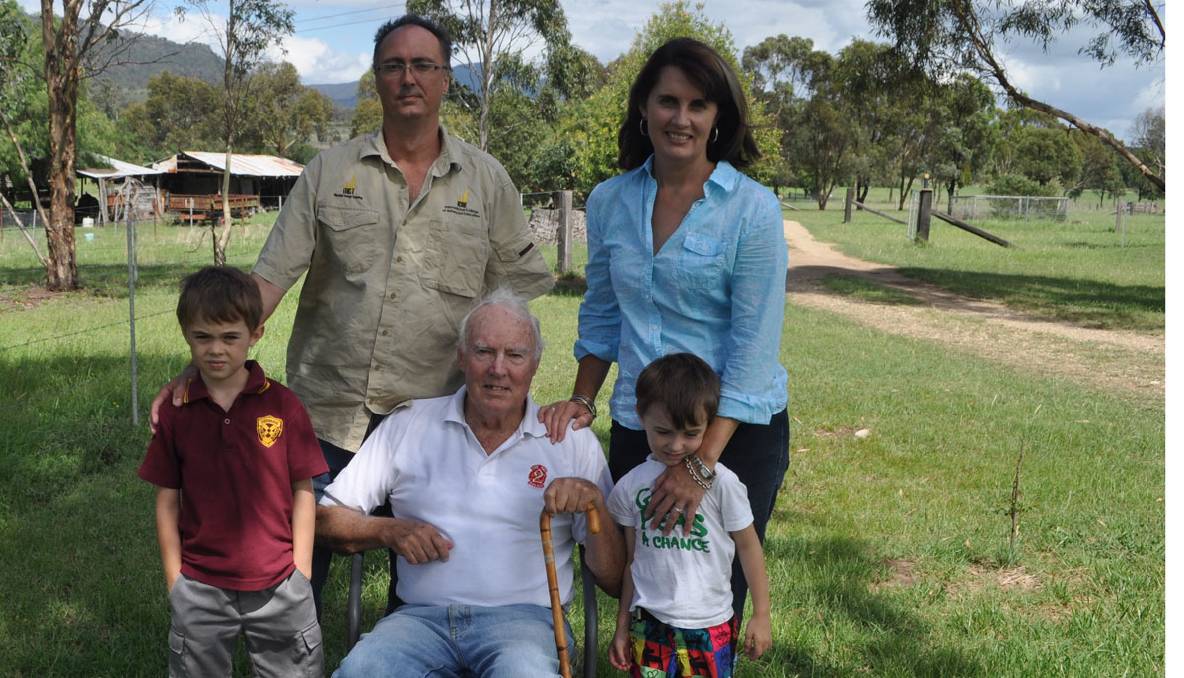 CONCERN: Douglas Chapman with his son, Bryan, daughter-in-law Louise and grandsons Myles (left) and Jonathon on their Apple Tree Flat property ‘Appletree’ owned by the family for more than 100 years.